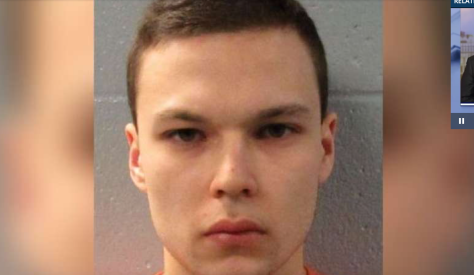 “In his book #Schizophrenia – The Sacred Symbol of #Psychiatry, psychiatry professor Thomas S. Szasz, M.D., says “There is, in short, no such thing as schizophrenia” (Syracuse University Press, 1988, p. 191). In the Epilogue of their book Schizophrenia – Medical Diagnosis or Moral Verdict?, Theodore R. Sarbin, Ph.D., a psychology professor at the University of California at Santa Cruz who spent three years working in mental hospitals, and James C. Mancuso, Ph.D., a psychology professor at the State University of New York at Albany, say: “We have come to the end of our journey. Among other things, we have tried to establish that the schizophrenia model of unwanted conduct lacks credibility. The analysis directs us ineluctably to the conclusion that schizophrenia is a myth” (Pergamon Press, 1980, p. 221).”

The fact is a patented technology, can send TELEPATHIC MESSAGES and it is not aliens nor demons.

A massive, Nazi based human experimentation program, so monstrous most cannot believe it exists proven by open literature evidence. Logically, the cover-up demands the strategic use of the Association of Psychiatry, joined with Frankenstein scientist as sidekicks for DECADES!

Officially the DOD named the patented technology the “Voice of God” however, many human guinea pigs marginalized as expendable, report it as the “Voice of Satan” instructing them.

INTO THE HEAD OF HUMAN TARGET aka PATENTED HEARING VOICES

This blog and video depict the weaponized high-tech capability of patented microwave technology, creating the Microwave Auditory Effect, Parametric Speaker beams, and the Hypersonic Sound System. This video is NOT MEANT, repeat IS NOT, intended to thwart any type of official diagnosis, and should not be viewed as such.

NOTE:  This video is also now the hope by the intense COINTELPRO effort around Human Rights Advocate Renee Pittman to apply the mental illness tag.  This is in spite of a sound, undisturbed, clear mind, which created this blog, the website, six books, in the “Mind Control Technology” book series, on Amazon and this “Creative Treatment of Actuality…”  Good luck!

Why?  The mental illness tag has been used effectively for DECADES, originating with MK ULTRA, with the Association of Psychiatry, reported being on the payroll and many studies within the heinous government-funded 20-year nonconsensual human experimentation program as the foundation.

This video documents one of the capabilities of mind invasive technology and the reported horror of OFFICIALLY beamed verbal harassment being reported nationwide and globally within ongoing human experimentation programs.

By numerous accounts of highly credible individuals, advanced technology is in full use, Post 9/11, and continues to evolve as systems and devices in ongoing research, TESTING, and development programs highly developed and perfected for DECADES. 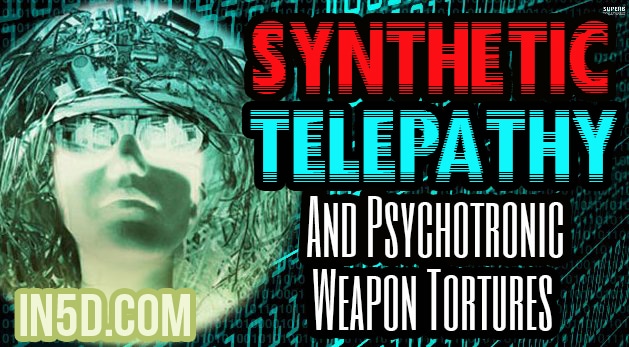 BELIEVE IT OR NOT!

NOTE:  This horror depiction is not for the faint of heart. It was created to reveal the horrors of what people report when experiencing, 24/7, real-time tracking and monitoring, high-tech beamed harassment, continuous efforts for guinea pig hypnosis, technological sleep deprivation, dream manipulation, etc., within an intense, secretive fear-based harassment campaign designed to push a target over the edge.

Do you actually think targets are beamed thoughts of Angels, love, and kindness in these focused efforts targeting the mind?

This ruthless program, today, yesterday and tomorrow is NO JOKE!  If you grasp this then mission accomplished.

“Since the dawn of time, the most powerful groups in every society have practiced forms of mind control on populations. They determined it was necessary. Eventually, they decided it was their most important job. Convincing the masses that a fabricated reality is Reality…that task requires formidable mind control.”

Experiments with parametric and directional speaker systems have been going on since the early 1960s. Ultrasonic sound has much smaller wavelengths than regular audible sound making it much more directional than a traditional loudspeaker system. Most speakers are designed to throw sound as far and loud as possible.

SCHIZOPHRENIA – IS THE NEW AD GIMMICK

The official goal, to push the target over the edge, into acting out for entrapment, suicide silencing, or discrediting by strategic labeling of the mental illness tag.

What is a parametric speaker? 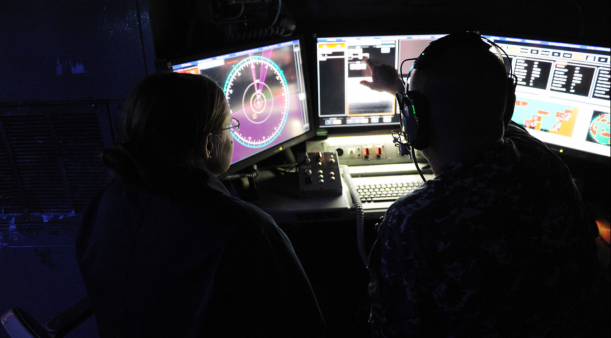 And, a bio-coded system does not require microchip implanting.  See “Biometric” blog.

PROGRAM IS SHROUDED IN SECRECY

FOR GOOD AND OBVIOUS REASONS

Knowledge is power and

WITH HOPE TO SAVE LIVES!

INSPIRED BY TRUE STORIES and how

Synopsis:  High school Chemistry teacher, Josh McKensie had a reputation for being one of the best teachers in his state. That was until he gave a student a non-passing grade.  The student then alleged that the reason was due to her not accepting the teacher’s sexual advances.

SYNTHETIC TELEPATHY – The Article Wikipedia Did Not Want You to Read

A VOICE ONLY YOU CAN HEAR – DARPA’s Sonic Projector

Human experimentation victims, globally, report the scientist hoping to control people and operatives using this technology are factually using the covert RNM capability to beam deviant suggestions, against their will or out of character in set-ups, and open literature evidence documents this also as a definite part of the overall brainwashing, testing operation.  However, without a doubt, the capability to read the victim’s thoughts is PIVOTAL in these covert terrorist/PSYWAR operations.

HOW THEY SPY ON YOUR THOUGHTS

NEURAL WEAPON, ONE EXAMPLE OF MANY VARIETIES

THE DIFFERENCE BETWEEN ARTIFICIAL TELEPATHY AND SCHIZOPHRENIA

NOTE:  As detailed in the documentary, knowledge of the Electromagnetic Spectrum’s various uses for mental manipulation, influence, and control of individuals, groups and large populations, is antediluvian.  As a result, of this awareness, today, many highly credible individuals now question if the technologically beamed “Synthetic Telepathy” has been the culprit long before revelations.

the difference between targeted individuals and schizophrenic persons

The convenient “Martha Mitchell Effect” and misdiagnosis of those reporting the truth of mind invasive technology, a beamed high-tech, patented capability, is redirected to a label of mental illness as part of the cover-up.

role in the set-up for the mental illness tag as well.

Organized recruits deny involvement in “The Program” while employing “Gaslighting” techniques and are sworn to secrecy under National Security Orders.

Victims are reported to be delusional or insane after accurate, truthful reporting high-tech targeting.  This has been for DECADES a very effective, covert method, in full use today for discrediting and silencing of anyone attempting to reveal this MONSTROUS underground program and speaking the harsher truths.

A SMALL FEW VICTIMS WHO REPORTED RELENTLESS “VOICE TO SKULL”

(V2K) TARGETING WHO, SNAPPED OR GAVE UP AND COMMITTED SUICIDE. 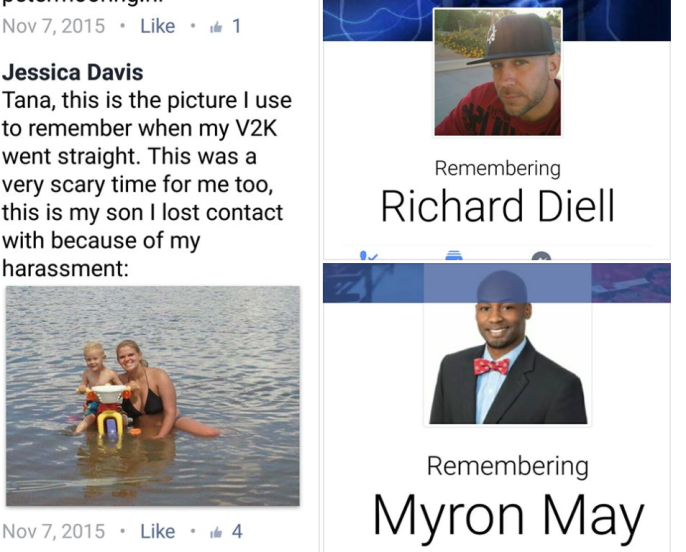 Prior to taking these actions, all reported they just could not live with the relentless, beamed, covert verbal harassment and degradation typical of this specific type of targeting.

Myron May, after losing everything, to include a brilliant career as an up and coming Assistant District Attorney, it is believed intentionally set himself up for “Suicide by Cop” of which these operations are happy to assist. 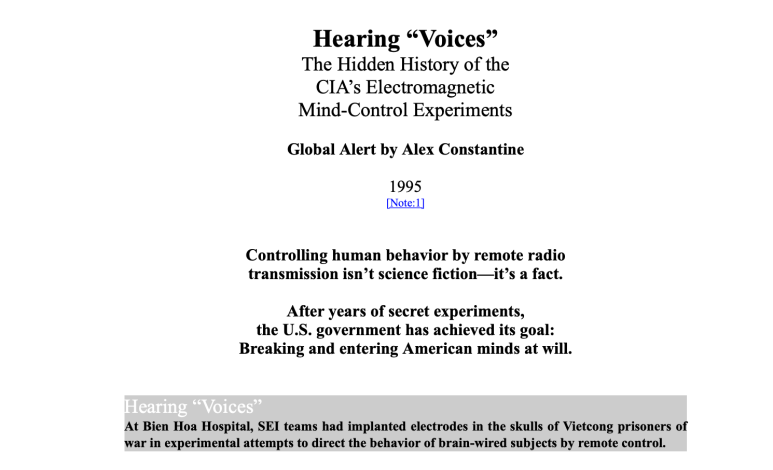 AN EXAMPLE OF THE EARLY STAGES OF DEVELOPMENT

PROGRAMS AMONG MANY OFFICIAL OPERATIONS

IT IS NOT ALIENS NOR DEMONS OPERATING THIS TECHNOLOGY NOR A CHEMICAL REACTION OR IMBALANCE IN THE BRAIN!

It is, without a doubt, human monsters, who have been involved in this wretched research, TESTING, and development programs, much longer than reported or documented by open literature evidence.

However, above all others, the black community has suffered from the programming and covert destruction of lives as initial human lab rats.

Whistleblowers, and Civil Rights activists, of all races, have been hit hard and covertly silence by either high-tech synthetic death, official discrediting as mentally ill, or both.

Examples of various patents with the

ability to alter consciousness are below.

EXPERIMENTATION WITHIN THE BLACK COMMUNITY AS GUINEA PIGS

Awareness of the uses of the energy from the Electromagnetic Spectrum dates back well over 100 years and even thousands.

In fact, it was in opposition to Freemasonry, that people used and constructed “Tin Foil Hats” which is a source of ridicule with people in awareness making the same claims.  The “Mad Hatters” did after believing that their minds were being read and tampered with by the covert power structure.  The problem is, this is a capability from the weaponization of the bioelectric body and the energy around the earth, in which all live resonates too.

This is documented to have occurred as far back as the 1700s.  The question is what stemmed the belief?

HISTORY OF THE TIN FOIL HAT 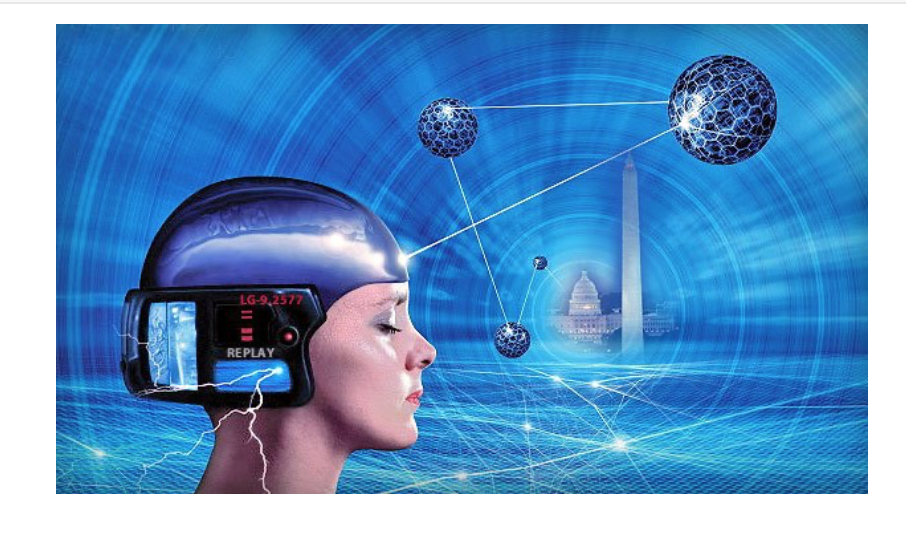 Following is a list of actual testing and development programs, which ran for 20 years all across the USA and by the involvement of various agencies.

Documented is the specific focus, in specific areas, which set the stage for what is happening today, and resulting highly advanced psychotronic/psychological electronic technology.  The technology remains in ongoing, research, secret TESTING, and development programs in operations by the Department of Defense, unified with the DOJ legalization for crowd control “research activity.” (See Blog website link “Technology Approval”)

Those involved also include contractors hired by the DOD Military-Industrial Complex.

ANYONE EXPOSING THIS PROGRAM

THE GOVERNMENT SCIENCE OF DESTROYING WHISTLEBLOWERS

JUST HOW FAR WILL THESE COVERT EFFORTS GO TO 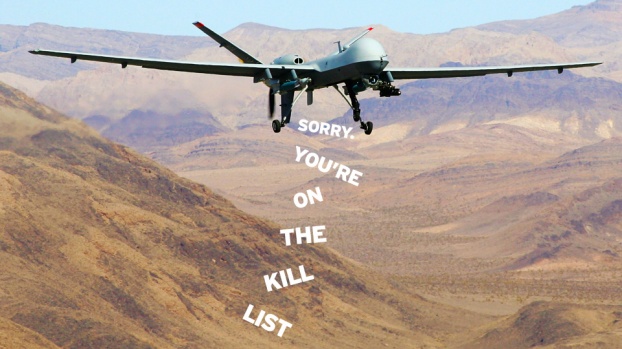 30,000 drones approved for US skies by 2020.  Many Human Rights Advocates, activists, whistleblowers report this specific type of aerial focus, 24/7, and that it includes the patented, beamed, mind invasive psychotronic weapon capability use on them and on anyone around them for influence combined with covert torture for subjugation. 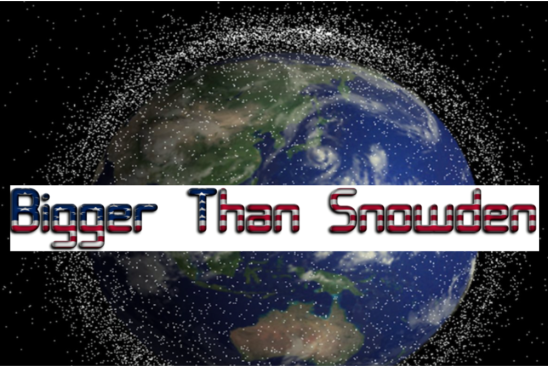 THE SECRET GOVERNMENT RULEBOOK FOR LABELLING YOU A TERRORIST

The fact is, victims have literally been forced to become proactive or suffer in silence, covert malicious attempts focused on the destruction of their lives in a program proven that will viciously destroy anyone around a victim as well, to impact and to silence the victim in PSYWAR to include targeted victim families.

With high level agency involvement, to include DOD contractors for plausible deniability, revelations of documented patented technology, research, TESTING and development program, and documented factual approving laws, use of drones,  and  ongoing human experimentation for military and law enforcement personnel, the odds are great making full disclosure of the truth both pivotal and URGENT amid great covert suffering. 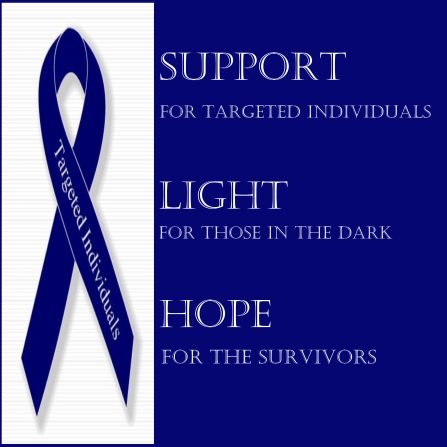