REPORTED ACROSS THE USA AND GLOBALLY!

How Does GangStalking Work?

IN GANG STALKING OF ANYONE WHO CHALLENGES THE SYSTEM”

Gangstalking is really a covert government or police investigation. It’s similar to COINTELPRO or red squads, and it’s being used on a lot of innocent people to ruin them and make them look crazy. Gang Stalking is all about government disinformation and using civilian spies/snitches to help with stalking and monitoring innocent people.

Jim was placed under covert investigation by his employer because of his whistle-blowing. Mistakenly he termed it gang stalking, which made him sound crazy.

A long-term law enforcement campaign led by the FBI, and, supported by police intelligence units (formerly known as “Red Squads”). COINTELPRO targets are both disliked political, as well as, criminal organizations, and their leadership. COINTELPRO relies heavily on applied behavioral psychology. It seeks to maximize internal factionalization within targeted groups by identifying and exploiting individual member and organizational weaknesses. In Europe, COINTELPRO-style police techniques are known as “political control technologies”. 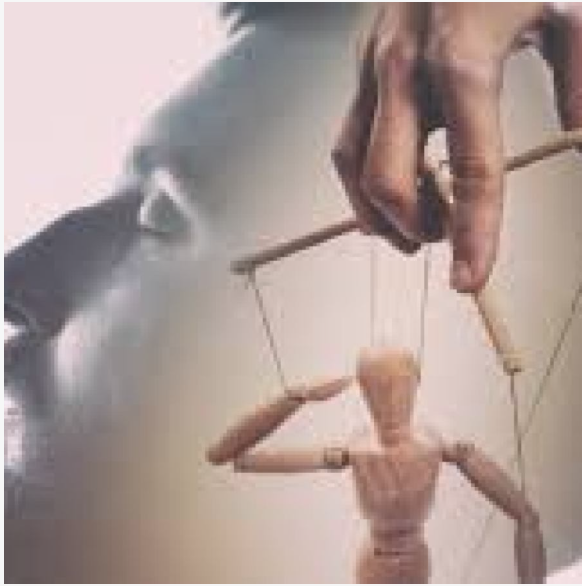 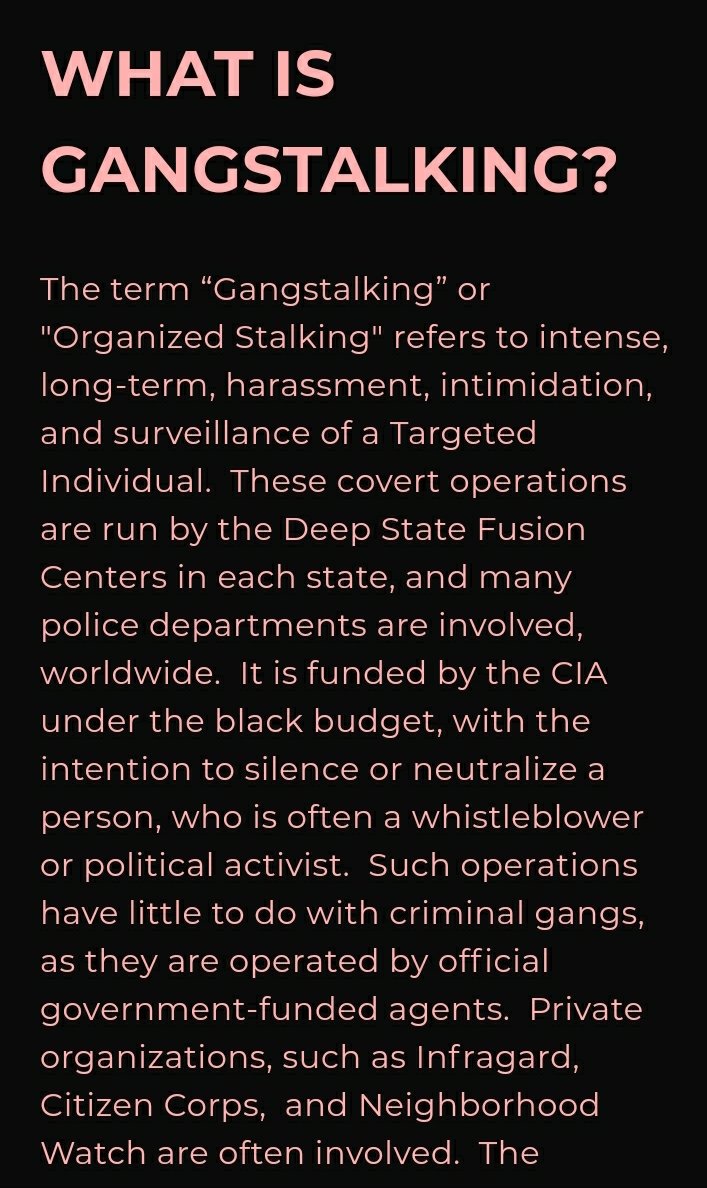 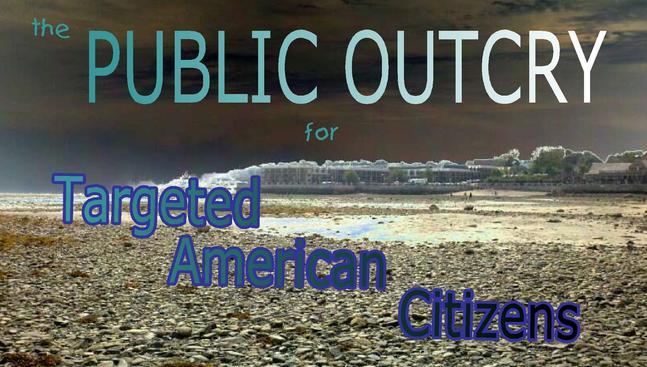 Eleanor White in the videos below is a highly respected Canadian Whistleblower, a retired engineer now in her 80s, and TARGETED who has spent a large part of her life, over 30 years focused on exposing this official, covert, MONSTROSITY that has marginalized human being to little more than human guinea pigs for psychological operations and ongoing experimentation of psychophysical weapon, systems and devices in research, TESTING, and development programs for decades!

Harlan E. Girard is another example of a U.S. citizen, among many, targeted for over 30 years, now in his 80s, who became a vocal whistleblower and an educational resource.  Below is the trailer for the TruTV Conspiracy Theory episode with Jesse Ventura for “Brain Invaders” excerpt of Jesse Ventura’s interview with him.

(DARPA) ON YOUR MIND

“Ventura takes on what we have all suspected for so many years, the government’s use of advanced technologies, very real mind control.”

NOTE:  See the full episode in the blog on this site titled “BRAIN INVADERS…” of which, reportedly, this episode and similar episodes reporting government advanced technologies and various types of official corruption possibly led to Ventura’s show being canceled.

Harlan E. Girard was born in Cleveland, Ohio in 1936. He studied for the B.Chem.E. degree at Cornell University and received the B.A. degree in economics from The University of Michigan, Ann Arbor, from which he graduated in 1957.

From 1957 to 1984, Mr. Girard was employed and self-employed in a number of businesses, all of them centered on real estate development. In 1984, he returned to school to study urban design and landscape architecture at the University of Pennsylvania, from which he received the Master of Landscape Architecture degree in 1988.

Since 1988, when his reported targeting began, Mr. Girard has been pursuing independent research into the development, testing, and evaluation of offensive microwave weapons, including especially mind-control mechanisms.

In 1990, Mr. Girard established the International Committee for the Convention Against Microwave Weapons for the purpose of continuing his work, in the event of his untimely death. The International Committee has an arms control function but it is also interested in the atrocities being committed by the United States Government (USG) in the research, development, testing, and evaluation of biological process control weapons. In addition, it is interested in the USHG’s compliance with the conventions to which it is a State Party, such as the Convention Against Torture. The International Committee contends that involuntary human medical experiments financed by any government are punishment per se, and the infliction of gratuitous pain and suffering on involuntary human subjects is torture within the meaning of this Convention.  He also reported over many years, ongoing official, “Organized Community Stalking” and technological harassment.

Mr. Girard received an Honorable Discharge from the United States Air Force in 1963.

Over the past 30 years, thousands of people who identify as “targeted citizens” report the government has been engaging in a covert war on the minds of the civilian population for ongoing human experimentation.  Cheryl Welsh has been the target of the secret U.S. government mind-control experiment program for almost 30 years.  She also reports “Organized Stalking” as does many targets marginalized as human guinea pigs and placed into “The Program.”  Her website “Mind Justice” below is a wealth of information. 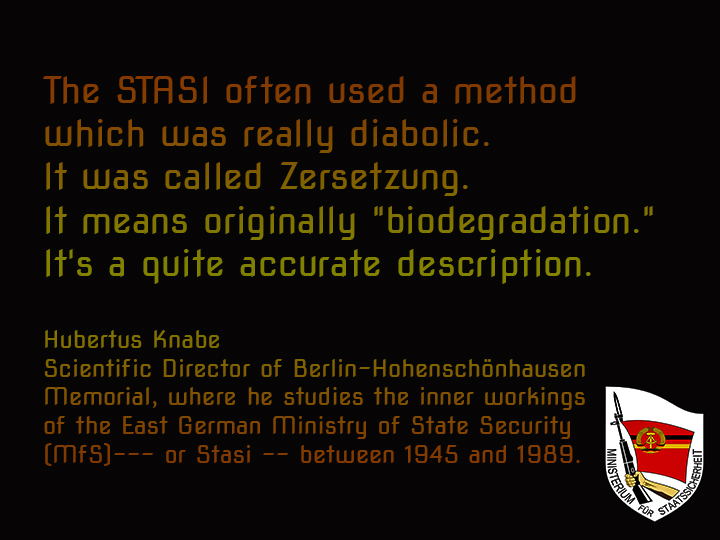 THIS IS THE STRATEGIC GAME PLAN! 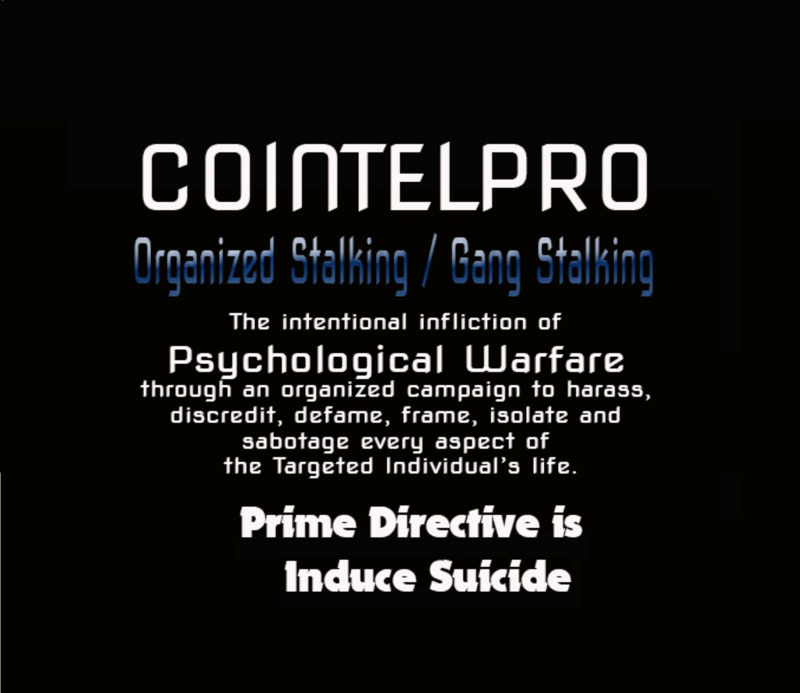 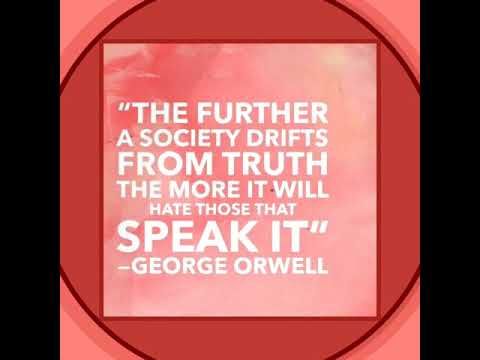 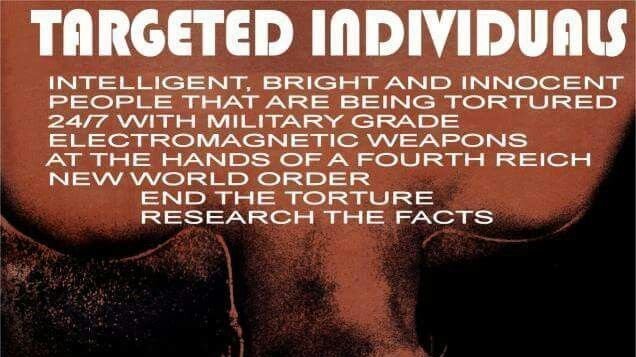 There is no reason for this type of unjustified hate and those involved, including officially, fit the narrative of borderline sociopaths.  Many covert tactics are used to give the target a synthetic mental illness. This is the result of relentless PSYOPS, specifically so that the target appears mentally ill.  Key also is an official, strategic hope to discredit the target when seeking help after the perception has been created and documented.  They want the target isolated from family, friends, discredited to authorities, doctors, employers and coworkers, and basically anyone in a position to help.

THIS PROGRAM WANTS NO ONE AROUND THE ISOLATED

TARGET TO VALIDATE THE TRUTH… 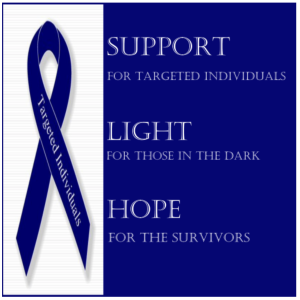 WHY IS THIS HAPPENING WITHOUT LAW ENFORCEMENT INTERVENTION?

IT IS BECAUSE ORGANIZED STALKING IS A MOBILIZED


THE TACTICS ARE DESIGNED TO APPEAR BIZARRE SO THE TARGET LOOK’S CRAZY.

SILENCE IS NOT AN OPTION!